Some goats are super friendly.  They’ll come up to you just to say hi, to ask for a scratch behind the ears, or to lay their heads on your shoulder.  Some goats are happy to say hello, but won’t seek out human company.  Some goats, though, are kind of a problem. 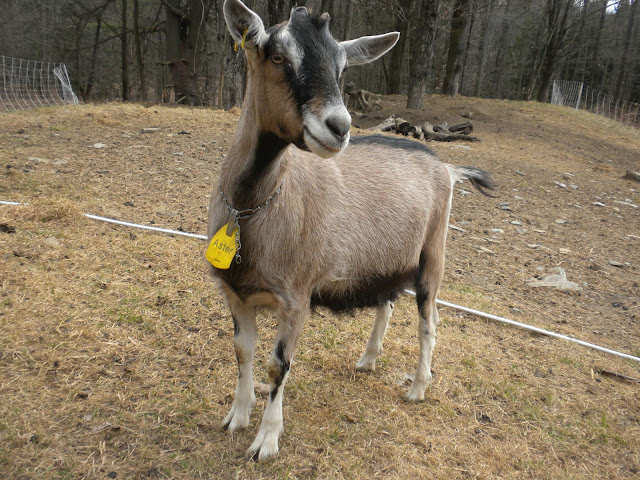 This is Aster.  She’s all kinds of problem.

But would you look at that face?

Aster happens to be one of my favorite goats.  Why?  Look at her!  She’s adorable, so that helps.  She’s also a complete spaz attack.  When I first arrived at the farm, she would startle and run away when any person walked within ten feet.  Needless to say, dealing with a terrified goat is not very much fun.  They’re fast and unpredictable.  Not something you want in a 100-200 pound animal.  So I decided Aster would be my project.  Last year Katie, one of my coworkers, made an effort to tame Bama, that enormous tank of a goat who had quadruplets this season.  I’ve heard that Bama was worse than Aster, but now Bama, while not really sweet, will usually tolerate our presence.  Katie gave me some tips.

Katie’s tips on how to tame a goat:

Well, there was a little more nuance than that, but that was the main point.  Grain is to goats as candy is to children.  They will pretty much do anything for it.  I started out by holding out a handful to her across the mangers while she was eating hay.  Eye contact makes skittish goats even more uncomfortable, so I looked the other way.  Annnnnd … she ate it!  She was a little wary at first, but every day, I would slowwwwwly creep up to within arm’s length of her, hold out a handful of grain, and pretend I didn’t know she existed.  After a few days, I started looking at her, and even attempting to pet her while she ate.  A few days after that, she began to come investigate my pockets every time I entered the barn.  If I moved too quickly, she would still freak out and run away, but she was getting better.

Now I’ve been here for almost three months, and worked with Aster for most of that time. She has totally turned around!  We don’t have to move like molasses around her or avoid eye contact.  I almost never give her any grain anymore, but she still comes up to hang out, and even lets me hug her sometimes.  After a week or so of working with her, and calling her name at about the same pitch, she also started coming when called, or at least perking her ears up and looking at me when I wanted her attention.  Seriously this is the cutest thing ever.  Of course she doesn’t really know her name, but it’s still nice.

Aster thinks maybe my sleeve will also be tasty.

The other problem with Aster is that it seems like she may not be pregnant after all.  She was getting nice and tubby, just like all the other goats, but then when their udders filled up and they started popping out kids, Aster just got fatter.  Now we’re thinking she might just be a little butterball.  While this makes her all the more cute and cuddly, it’s not very good for business.  She’s eating and taking up space, but not making any milk for us.  I’m not sure if we’re going to sell her to another farm, or to someone looking for a sweet little dairy goat or a living lawn mower.  We might keep her, but if she’s not going to pull her weight-and there’s quite a bit of weight for such a young goat-we might not be able to keep her here.

Such is life on the farm I suppose.  I give her a hug almost every day, just in case she’s not here for much longer.